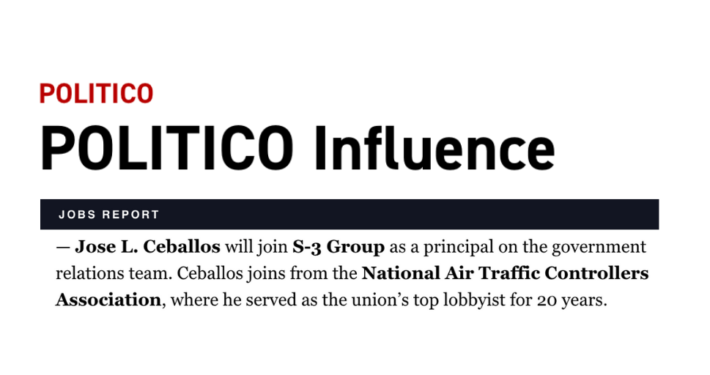 WASHINGTON, DC – S-3 Group announced today that Jose L. Ceballos will join the firm as a Principal on the Government Relations team. Ceballos joins the firm from the National Air Traffic Controllers Association (NATCA) where he served as Director of Government Affairs for over 20 years leading the bipartisan political and legislative strategy and activities for the union.

Ceballos is an accomplished public policy advocate and political strategist with more than two decades of experience in government, politics, public relations, and community affairs arenas. Prior to joining NATCA, Ceballos served in the Clinton Administration presidential appointee as a Senior Advisor to the U.S. Secretary of Transportation. He was previously appointed as Confidential Assistant to the Secretary for the U.S. Department of Commerce and led an intra-agency task force for the U.S. Treasury Department. Ceballos also served on numerous White House Working Groups and was appointed to the U.S. delegation headed by President Carter transferring control of the Panama Canal.

Ceballos has served in senior posts at the Democratic National Committee (DNC), the Democratic National Convention and numerous congressional campaigns. Ceballos has also held key positions on presidential campaigns, serving as Deputy Chief of Staff of VP Ops for Kerry for President; Director of the Miami-Dade County’s Campaign and Recount for Gore-Lieberman; and Florida’s Political Director for Clinton-Gore—winning the state for a Democratic presidential candidate for the first time in 20 years.

“Jose deepens our Democratic bench in the House, Senate and the Administration. His extensive experience on both the policy and political fronts makes him a perfect addition to our bipartisan team. He knows how to move the needle and get things done which will have an immediate impact for our clients,” said S-3 Group Managing Partner John Scofield.

Read the announcement in POLITICO Influence.

S-3 Group is an integrated legislative, regulatory, and communications consultancy that helps clients shape policy outcomes and brand reputations. The firm brings together the power of its access, reach, and knowledge with the latest stakeholder engagement methods to create unprecedented influence for its clients. S-3 Group’s bipartisan team of policy, media, digital, grassroots, and political experts work together using the latest data to develop insights and strategies that help clients achieve their objectives.